A Letter From The Editor:

Although I didn’t get to stage dive during Lemaitre’s set (like I’ve always wanted to) the show, interview, and experience were overall fantastic.

Standing front row I’m  sandwiched between a 16 year old girl to my left and a boy no older than 18 to my right. I realize that a.) I am probably the oldest here and b.) this all-ages concert is going to turn into a face-chewing dance-fest. Which is understandable  when you open for Porter Robinson an artists who has over 3 million followers on soundcloud.
Anyways despite a less than fully engaged crowd Lemaitre performed a fantastic set full of new and old songs. Their first performance jitters were noticeable but over time, and as more songs were played Lemaitre’s confidence grew. By the end Ketil would perform guitar solos atop speakers and Ulrik would pull some fancy aerosmith style mic work.

DnM : We last got together 2 years ago.

U: Yeah, it was the Skype interview.

DnM : Now, this is your first stop on the tour and your first time in Vancouver. How do you like British Columbia?

K:  Love it! Great food, cool city, great venues — the venue here is right next to a huge music store — I was in heaven for a while there.

U:  I really like how it’s  closer to home, Europe.  It’s still got the diversity of food and culture that you would have in the US but you also have the benefits of health care.

DnM : This is your 1st stop of 40 and first show completed – tell me what that’s like? This is…this is a big step.

K: This is so exciting.  I mean, Porter’s show and music have been such a cool left turn. Well, at least for me,  I don’t want to speak for Ulrik if he doesn’t feel that way,  but it’s just so cool to be apart of it,  both the album and tour are amazing. His live show is just so great.

U: The line up is great, it’s right up our alley with Giraffage and Porter Robinson. It’s a good fit.  It’s like we are all the same age, a lot of cross over in the fan base. We work really well together.

DnM : I want to start from the beginning: December 2010,  I came from home University for Christmas and my sister shows me this song like: “Hey you should check these guys out”.  You had two songs on youtube, Blue Shift and Primeval Atom. We then got together two years later for our first interview, when you were working on your third album, and now two years later signed and touring.

K:   Being signed is not as big as a deal as it sounds like.  First of all, you can get signed to whatever. If you really want to get signed you can.

U:  Right but, you won’t get signed before you reach a certain popularity. So it’s really nice to be signed by a label we think is really cool. We had offers before but  it was always “Why can’t we do this ourselves?”. But then Astrwalwerks came, which we think are really cool, and they only have stuff we really like. So we wanted to be apart of that. You don’t necessarily need a label these days,  of course they can make you or break you.

DnM :  Well I’m glad things worked out the way they did and your happy with your label. Over the 4 fours you have had some pretty cool stuff happen. I mean being mentioned in Forbes is badass.

U:  My friends, who study economics and shit always asked : “Do you make any money?” “How do you like live and stuff” and once that Forbes article came out they all texted be me like “Wow shit, that’s huge”!

K: That was the firs time my Grandpa called my mom and was like: “Holly fuck, what’s the deal? I thought he was in a band I didn’t think he was in a business”.

K: We don’t want to claim to be social media experts because we are not. We see a lot of artists  making albums or EPs and they go out and with like 53 [facebook] likes and say ‘you gotta buy our album because we spent a lot of money making it’.
K: That’s not how it works today. If the songs are good people are going to listen. You have to give it out for free first. You can’t capitalize to soon.

U: I just feel uncomfortable making people pay for music. Anyone can stream music through youtube, soundcloud or spotify.

K:  When someone buys your album its a vote of confidence it’s like they want to see you make it to the next level.

DnM : Definitely. That brings me to my next question  regarding your  EP – Singularity. Your first three albums were titled ‘Relativity’,  was there a change in approach to recording the new one?

K: It’s a deviation in a lot of ways. We changed up a lot of the tempos, except for Wait.
I think it’s a good set-up for the full length album we are writing now. We are going to have some of those song on it and we don’t want to be trapped with the same sound. For us, it…

U: It wasn’t intended to be different, it was just the tracks that made the cuts. A lot of the stuff we are working on for the album from all over the spectrum; songs like friendly sound to our newer stuffer  like high tide, which is blues influenced in some weird way. We want  to make many kinds of music but it needs to be coherent.

DnM : Yeah like the sick, to be cool, and flow, your hair. DnM : I have to ask, what’s the  story behind  your logo?

U: It’s basically geometrical shapes. We wanted to bring something on the road and found out that triangles are the easiest shape to travel with. So I sat there playing with models of triangles and something came out.

DnM :  No shit. I really wanted to see it at the concert. The cover of Relativity 3, when it’s on fire, is so cool.

U: Yah yah, that was fun. We borrowed our friends pool while their parents were away.  They didn’t know what we were doing. It was scary. We actually put gasoline in the pool, it was super guerrilla. 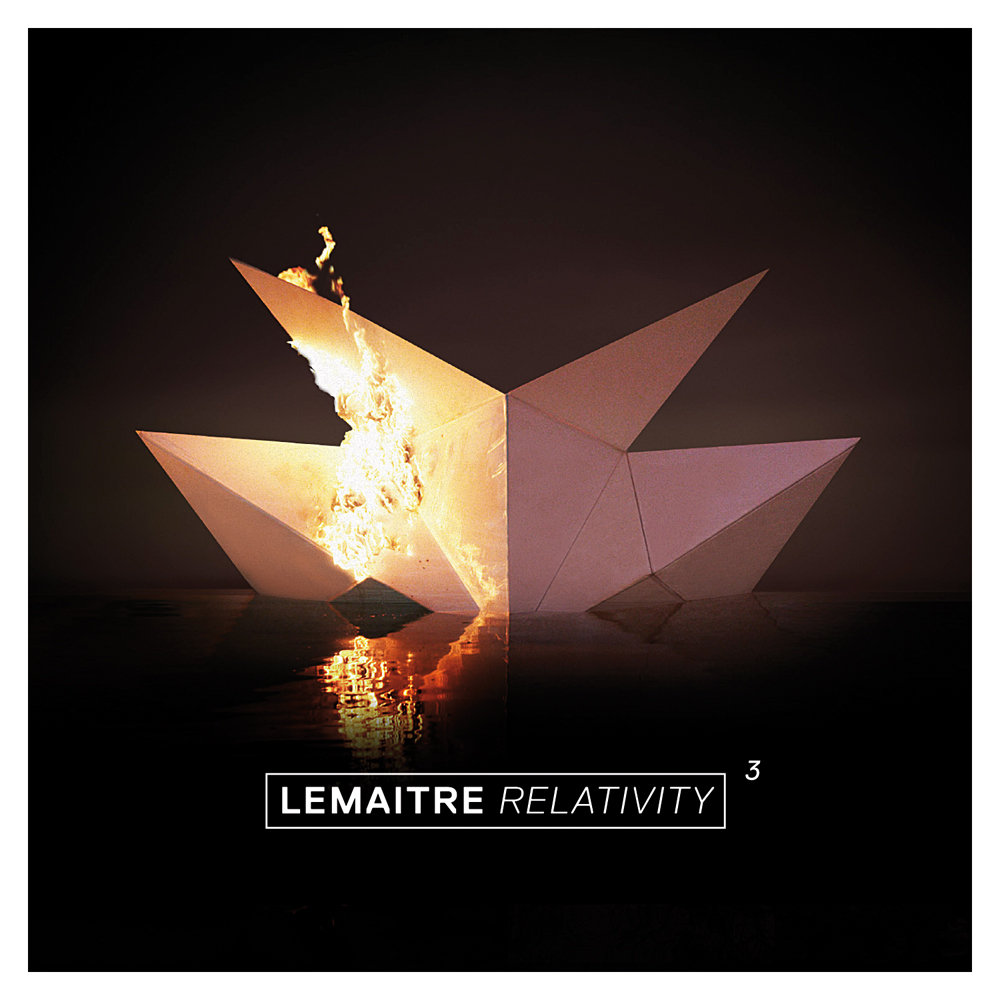 DnM : Let’s back track. Your album title, Relativity, was a reference to Relativity theory. Now there’s Singularity.  Is singularity staying the same vein by referencing to Singularity theory?

K: I want to say this, it means one of two things and I am a very big fan of popular science.  It’s Singularity in a physical sense. The big bang would have been a singularity event. If you believe in the multi-verse theory then there are many singularity events.  Also our booking agent told us that it was when computer become sentient.

U:  We want the album we are working on to be great and tour with the album. Tour on headlining shows while carrying as much gear as possible, a trailer filled with equipment

K : Leave a legacy of albums. One at least that’s legendary.

DnM : That’s it for me guys. Thank you so much for your time.

U K: Thanks for having us.